Yesterday was a day of calm; today was not. After a tough nights sleep I got up early and left at 8am. Most of the 57 miles was on Florida Highway 50. Driver was up all night coughing (pollen + hotel AC), so I went on without him. There was a bike lane the entire route. No issues throughout. 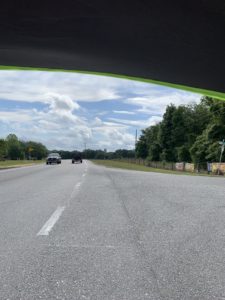 Loud was the theme for the day. The cars wizzing by me and music I listened to. Both helped me stay very alert! The cars were averaging between 50-60mph going either way. The cars on my side (with traffic) were giving me plenty of space. The mirrors were very helpful today. At the 35th mile we stopped at Cheeser’s Palace Cafe in Clermont. The name brought me there and the Cheesy Omelet was very Gouda!

After lunch I didn’t have long until I reached Orlando. This is when I started getting concerned. The closer to Disney I got, the worse the drivers were. I jumped on a sidewalk as soon as I could and got out of the way. A few people took pictures of the Trike and a few asked what it was at red lights. Still getting people’s attention!

No luck on going through any parks, so tomorrow I get up early and head east back to A1A. First stop on the Atlantic will be Cape Canaveral and hopefully NASA visit.